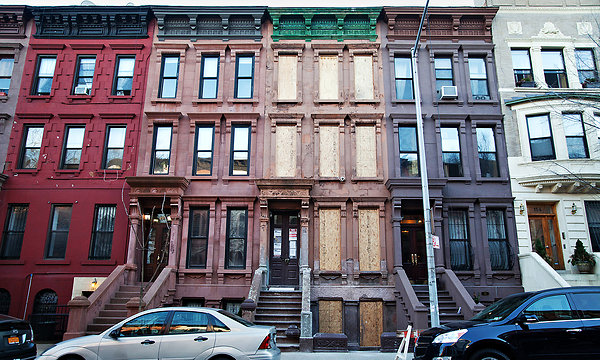 Joel Feazell and Claudia Aguirre paid $920,000 for their home-to-be on West 120th Street in Harlem. The couple are midway through a renovation.

FOR a time, Claudia Aguirre and Joel Feazell lived happily in a two-bedroom one-bath co-op on the Upper West Side with their two daughters. But as the children grew, the space became increasingly cramped. In particular, they needed another bathroom. They began to hunt for a larger apartment, which eventually led them north of 110th Street. There, they spent months researching condominiums, co-ops and, finally, brownstones.

Joel Feazell and Claudia Aguirre with their daughters, Paloma, left, and Daniela, on the steps

“It dawned on us that the price we would pay for one more bathroom on the Upper West Side would get us an entire brownstone in Harlem,” said Ms. Aguirre, the principal of M247 Dual Language Middle School on West 92nd Street.

So last fall, the couple bought an abandoned 17-foot-wide four-story row house on West 120th Street for $920,000. They are now midway through a gut renovation.

Ms. Aguirre and Mr. Feazell, who is a managing director at BNY Mellon, have joined a long list of middle- and upper-middle-class New Yorkers who moved to Harlem over the years in search of space and relative affordability. When real estate slumped in 2008, stories like theirs became less common, as glamorous new developments in a still-gentrifying Harlem suddenly seemed a risky bet. The median sales price in Harlem fell by nearly 16 percent between 2007 and last year, to $456,061, compared with less than 3 percent in Manhattan as a whole in the same period.

But in recent months, there have been signs of a resurgence, brokers and residents said. Inventory has fallen, with the number of apartments and brownstones for sale in Central Harlem, for example, decreasing by nearly 5 percent in 2011 compared with the previous year, versus less than 2 percent for all of Manhattan. During the same period, the median price in Central Harlem — the area from Morningside Avenue to the west and Fifth Avenue to the east, and from 110th Street north to 125th Street — jumped by nearly 18 percent, to $536,635. In East Harlem, from 97th Street to 125th Street east of Fifth Avenue, the median price increased by nearly 5 percent, to $440,000, in 2011.

This compares with an increase of just over 1 percent for all of Manhattan, according to Streeteasy data.

Sofia Song, the vice president for research of Streeteasy, said that increase could be attributed to a strong rental market and low interest rates — a combination that makes buying more attractive.

The short commute on the express trains to Midtown and downtown Manhattan is a plus, as are the growing number of businesses in the area.

“We have a flower shop, a cute cafe down the street and a ton of hip new restaurants that have opened,” said Melody Rollins Downes, who with her husband, Quintano Downes, recently spent $1.95 million on a renovated brownstone on West 120th Street, a few doors down from Ms. Aguirre and Mr. Feazell. Before the building was renovated, “it was a crack house and the basement level was a gambling spot,” she said. “But now, this whole block has been transformed and there is really a great vibe up here.”

Norman Horowitz, an executive vice president of Halstead Property who has sold several hundred properties over the last decade in Harlem, said, “Harlem was gentrifying before the recession, then there was a pause, and now the trend is picking up again.”

Some experts caution, however, that a Harlem recovery could be destabilized if a backlog of foreclosed or distressed properties went on the market. While figures are hard to come by, “there is a lot of hidden inventory, where banks are just holding on to these units, but have yet to put them up for sale,” said Willie Suggs, a well-known Harlem broker.

The supply of properties for sale has tightened for several reasons, brokers say. For one, condos built in the boom were more affordable to start with — usually around $1,000 per square foot and under — so deep price cuts on top of that ensured that many of the units were steadily, if slowly, bought up. Low interest rates and federal incentives also helped bolster sales.

The recession nearly turned off the financing spigot for new projects, and even now, with banks starting to lend again, developers are thinking twice before jumping back in the ring. Finally, when the market collapsed, some condominiums were converted to rentals. 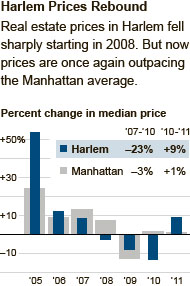 Hoping to buy an apartment in Harlem before prices rose precipitously, Molly Glenn and her boyfriend, Daniel Truax, searched for four months before they closed in December on an 800-square-foot two-bedroom on West 148th Street for $265,000. “It is everything we wanted,” said Mr. Truax, 26, who is the athletics ticket manager at Columbia University.

“While most of our friends are in Brooklyn,” said Ms. Glenn, also 26, a mechanical engineer at ThomasNet, “the parts of Brooklyn we really like are more expensive than here. I just didn’t see the point in spending more money to leave Manhattan and put a river between me and everything I do.”

Brownstones have also been selling at a clip, with the number of sales in Harlem up nearly 24 percent since 2008, to 47 sales last year, according to data from the appraisal firm Miller Samuel. A five-bedroom five-bath at 329 Convent Avenue on the western border of Harlem sold for $2.3 million, a $100,000 increase over its asking price. Nearby, 319 Convent Avenue sold for $1.97 million, far above the $1.6 million asking price.

“Normally, between Thanksgiving and Valentine’s Day we brokers go on vacation,” said Ms. Suggs, who is preparing to list two brownstones this spring for around $3 million each, a price tag not seen since the market crashed. “But not this year. People are willing to pay close to what they were paying prior to the market tanking, so we are doing our happy dance.”

Sensing that the market is turning, some developers are moving to bring new condos to the market. At 5 West 127th Street, a 13-unit condominium will go on the market in May. Mostly two-bedrooms, the apartments will have washers and dryers and granite countertops; some will have balconies. There will also a gym. Priced under $600 a square foot, the apartments range from $379,000, for a 698-square-foot one-bedroom with one bath, to $689,000, for a penthouse of 1,027 square feet with two bedrooms and two baths.

“Inventory is very low and the market is rebounding,” said Yoni Bak, the vice president for real estate development at Kane Ventures, the developer of the West 127th Street condos. Kane is preparing to break ground on a similar 15-unit project at 56-58 West 129th Street. “We are doubling down on Harlem right now,” Mr. Bak said, “because the prices for land are still reasonable up here.”

On West 116th Street, between Lenox Avenue and Fifth Avenue, L+M Development Partners is breaking ground on 85 market-rate condominiums. The project, still unnamed, is across from the Kalahari, a 249-unit condominium, now sold out, that the developers built in 2009. Like the Kalahari, the new development will include a gym and a community room, with prices somewhere in the $600-a-square-foot range.

But though prices are rising, they are still well below their peak. At the Sedona on East 119th Street, for example, 3A and 4A, the two units that recently sold, were listed for $445,000 each in 2010, and their recent sales prices represented an 18 percent and 14.2 percent discount respectively. And even after the price increases at Fifth on the Park, No. 13C is listed at a 24.4 percent discount from its original asking price of $1.26 million in 2008, while No. 19C is 27.3 percent below its original $1.32 million price.

Some builders contend that prices are still too low to justify new development. “At $500 to $600 a square foot,” said Michael K. Shah, the chief executive of DelShah Capital, a developer, “condo projects just don’t pencil out yet.” Prerecession condominium prices in Harlem were around $850 a square foot, he said, and until prices climb further, “there is just too slim a profit margin after factoring in the cost of construction and land — I don’t think you will see a lot of new development for at least another two to three years.”

Still, some brokers and residents insist that this market rebound is meaningful.

The Downeses had been living in a three-bedroom condominium on West 119th Street for six years before their growing family created a need for more space.

“We looked all over the city,” said Ms. Downes, an executive vice president of Pacific Investment Management Company, “but it was really hard to find any four-bedrooms for under $3 million.” When they found the five-bedroom house around the corner on West 120th Street, they began a slow negotiation with the developer over the $2 million price tag.

“Then one weekend morning I was out walking my dog, and saw two couples looking at the house, talking about making offers come Monday,” she said. “I went up to them and said, ‘Oh, we are already in contract, that is my house.’ ” She and her husband, who works on Wall Street, quickly closed the deal and moved in earlier this year.

“The market is very competitive right now,” she said. “We were told by our broker we could probably relist this house today and get $2.7 million for it.”