With high-end condos at record prices, houses on the Upper East side are now being seen as a better long-term investment

The grand townhouses on Manhattan’s Upper East Side are a throwback to the early 20th century, when the homes of industrial titans such as Andrew Carnegie and John D Rockefeller lined Fifth Avenue and Park Avenue.

While many have since been replaced by large co-operatives, hundreds of private townhouses remain on the side streets, particularly on the blocks between Fifth and Madison Avenues. They display a mix of architectural styles, from the Beaux Arts of the late 1890s and early 1900s to the neo-Federal designs of the early 1920s.
A century later, the values of those homes are still among the most protected in the city, experts say. 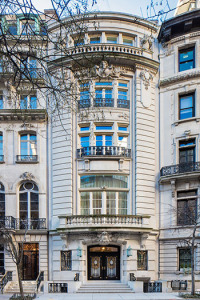 While a wave of more than 5,000 new high-rise condominiums bears down on the Manhattan market in 2016, putting downward pressure on what have been record price tags, the price of townhouses shows little sign of a slowdown.

“I believe that townhouses will start appreciating at a much faster pace than condos or co-ops because they’re not building any more of them,” says Kane Manera, a real estate broker with Douglas Elliman. “People are looking at condos at the moment and they’re seeing a price per sq ft which is way too high. That’s serving the townhouse market very well.”

Of course, a Manhattan townhouse will cost much more upfront than an apartment. The median sales price for a townhouse hit $5.25m in 2015, compared with $1.01m for a co-op or condo unit, according to Elliman.
The differential has been closing in recent years — because of an explosion of ultra-high-end condo developments, market insiders say. But that trend is slowing now that the number of upmarket condos is beginning to outpace demand.

The median price for a condo rose 7.5 per cent between 2014 and 2015 and 21.7 per cent over the past decade, according to a report released by Elliman last month. Meanwhile, the price of a townhouse went up by 28 per cent in a year and 111.7 per cent in a decade.
“The tide is turning now,” says Leighton Candler of the Corcoran Group, a Manhattan-based brokerage. “The willingness to pay $6,000, $7,000 and even $8,000 a sq ft for condominiums is slowing as people realise that, as a long-term investment, they’ll potentially have a more stable market with townhouses.”

Key to the dramatic price growth in the townhouse sector is the finite number of homes. While houses can certainly be built from scratch, most developers with vacant Manhattan lots prefer to maximise the value of their square footage by building towers. And in landmarked districts such as the Upper East Side, development of new homes is tightly controlled.
“If you wanted to spend $15m to $20m on the Upper East Side, there are maybe six houses to show you,” says townhouse broker Jed Garfield of Leslie J Garfield & Co. “That’s very thin.”
Availability is slightly better above $20m, but there are only about 30 on the market at any one time. On East 62nd Street, a five-storey, five-bedroom townhouse built in 1871 is on sale through the Corcoran Group for $22m. On the same street, a four-bedroom townhouse built in 1903 is on sale for $84.5m through the Modlin Group.
With such properties there is very limited turnover. Many of the largest Upper East Side homes are owned by private clubs, institutions and even countries, for which selling might be a complicated process.
In much the same way as owners of the stucco-fronted townhouses in prime central London, many foreign buyers purchase through a limited liability company for tax purposes and to park their wealth during times of global economic uncertainty.

For overseas buyers, townhouses are a way to access the city’s most prestigious neighbourhoods without having to disclose detailed financials to get by the notoriously picky co-op boards that rule the Upper East Side, says appraiser Jonathan Miller.
These boards have traditionally looked unfavourably at applications from pied-à-terre buyers and won’t allow owners to rent out their units.
The other advantage of townhouses is that they allow buyers to avoid the often high monthly common charges imposed by the condo boards.

Five-bedroom townhouse on East 62nd Street, $22m
Still, some foreign buyers aren’t swayed by what the neighbourhood has to offer. “I showed [a client] the finest houses on the market and he was completely unimpressed,” says Corcoran’s Candler of a potential Russian buyer who toured the Upper East Side.
“He was used to the London market and wanted a garage and a lawn out front. His eyes didn’t light up until we drove past the Frick Museum on Fifth. I had to tell him that wasn’t for sale.”