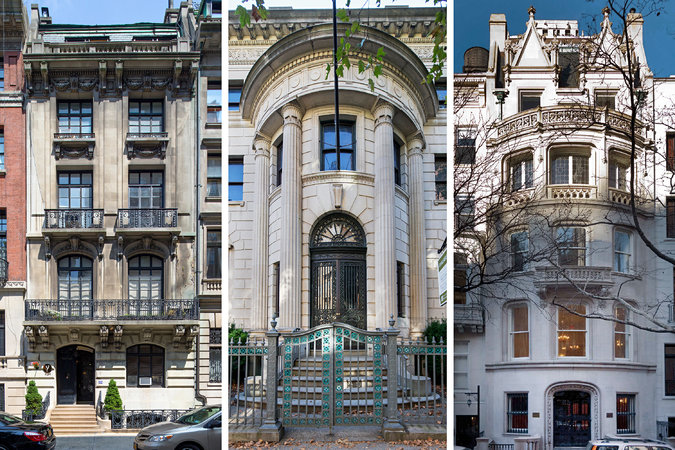 When the architect/designer Ogden Codman Jr. built himself a splendidly self-indulgent 40-foot-wide limestone mansion on East 96th Street in 1913, he built it to last, and it did.

It outlasted him — Codman, the celebrated co-author, with Edith Wharton, of “The Decoration of Houses,” a turn-of-the-last-century home décor bible, relocated to Paris in the 1920s — and several subsequent owners, eventually becoming the Manhattan Country School.

Something similar happened at 39 East 67th Street, where the architect Ernest Flagg took a nondescript 1877 brownstone and in 1904 transformed it into a Beaux-Arts limestone palace and literary salon of sorts for Helen and Arthur Scribner, of the publishing dynasty. It was a sophisticated destination, with leaded glass windows and marble fireplaces, but after its owners’ deaths, the house was sold in 1951 and chopped into apartments with a suite of medical offices as the anchor tenant.

The 1905 mansion at 57 East 64th Street, a 14,000-square-foot limestone chateau designed by C.P.H. Gilbert for the oft-married heiress Arlene Tew to display her high-end Francophile taste, more recently served as the New York headquarters of an Italian clothing company.

A borough away on Eighth Avenue in Park Slope, Brooklyn, the 50-foot-wide palazzo-style 1916 Tracy Mansion designed by Helmle & Huberty for a discerning tugboat mogul, John Tracy, now sits vacant after being the site of a Montessori School since 1969.

But all four of those historic buildings, and several others of their ilk and vintage, are sharing a potential turn-back-the-clock moment: Besides being for sale to the highest (preferably cash) bidder, they will likely undergo the exacting transformation necessary for a return to their original use as privately owned residences.

“It’s like a return to the Gilded Age,” said Sharon Baum of the Corcoran Group, who, along with her Corcoran partner, David H. Enloe, and Timothy Sheehan of CBRE Group, listed the Codman mansion.

The catalyst that has put these mansions and townhouses back in play is the steady escalation of incredibly wealthy buyers, many of them foreign, intent on acquiring one-of-a-kind homes that offer a level of privacy impossible to find at the city’s most exclusive co-ops and condos. Several of the sellers are foreign as well: France, Senegal, China and Burkina Faso.

“As the superluxury market has gained strength, at the same time, debt-burdened foreign governments in the aftermath of the financial crisis are looking for ways to cut costs or generate cash,” said Jonathan J. Miller, the president of Miller Samuel, an appraisal firm. “So we see the trend toward consulates maybe receding and the conversion of mansions to single-family homes returning.”

The former Scribner residence on 67th Street is among the candidates for reclamation. It was just listed for sale at $22.5 million by James and Anna Hall of Stribling & Associates.

“This change is reflective of what’s happening in the micro-economy of New York,” Ms. Hall said, “where we’re seeing a new breed of affluent, and often younger, buyers who have zero interest in being subjected to the rules and limitations presented by a co-op board. There’s an autonomy that comes with owning a free-standing property. A townhouse or mansion is almost like a piece of art and there are buyers who appreciate that history and want to be part of it.”

The Scribner property will require a substantial renovation, but boasts customized newer features like a top-floor glass conservatory. The seller inherited the property and has “no interest in being a landlord,” Ms. Hall said. “We envision two possible end users, an investor/developer or a buyer interested in turning it into their own residence, which we feel represents its best and highest use.”

No. 57 East 64th, which according to its co-listing broker, Paula Del Nunzio of Brown Harris Stevens, is the sole Gilbert-designed house on the market in New York at this time, is listed for $44 million. Another of Ms. Del Nunzio’s listings, the 1903 Charles Ogden mansion, currently the School for Practical Philosophy, on a pristine residential block at 12 East 79th Street, is for sale for $51 million.

A circa 1870s townhouse at 52 East 64th Street is on the market for the first time since 1970, listed at $17.75 million by Deanna Kory and Ileana Lopez-Balboa of the Corcoran Group. As a brownstone it was Miss Edward’s School in 1878, but after a serious limestone upgrade by the architect Frederick Sterner in 1916, it became a rental with high-profile tenants like Ethel Barrymore. The lower floors were for many years the site of a well-known veterinary facility, the Park East Animal Hospital.

The veterinarian, Dr. Lewis H. Berman, whose celebrity canine clients included Andy Warhol’s dachshund, Truman’s Capote’s bulldog and Lauren Bacall’s papillon, was renting the first floor for his business and a third-floor apartment for his family when the townhouse was put on the market “with me in it” in 1970.

He scraped together $5,000 in cash, obtained two mortgages, and became its owner/landlord, an arrangement that lasted until recently, when he moved his business to a larger space to “ensure the legacy of my animal hospital.” Dr. Berman said it was his hope that 52 East 64th, a historic house on a historic block, would find a buyer who, as the listing suggests, would embrace “a rare opportunity to convert back to a spectacular single family house.”

A graceful 1902 limestone townhouse at 9 East 89th Street that since 1981 has served as the headquarters of the New York Road Runners Club is listed at $24.75 million by Massey Knakal Realty Services, which anticipates a residential buyer. “Selling the building is a natural next step for our organization,” said Mary Wittenberg, the president of the Road Runners, which is moving its offices to Midtown.

After spending decades doing duty as schools, embassies, consulates, nonprofit headquarters, apartment houses and the like, these and a few other important and irreplaceable buildings, most already designated as landmarks, have returned to the market virtually simultaneously, with virtually identical marketing plans. The various brokerages entrusted with the listings are advertising them as ripe for conversion to what they were in the beginning: beauteous, commodious and expensive single-family residences.

“For 10 or so of these important properties to come on the market at the same time, that matters a lot,” said Gregory J. Heym, an executive vice president and the chief economist for Halstead Property and Brown Harris Stevens. “It’s a seller’s market like we haven’t seen in a while.”

Trophy townhouses are back in favor again with home buyers, according to Paul J. Massey Jr., a founding partner of Massey-Knakal, for a number of reasons: “The value of townhouses designated for some type of commercial or nonprofit role and the value of purely residential townhouses used to be more in line, “ he said.

“But in the past few years there’s been a growing schism between what they might sell for, with residential use commanding the higher premium. Some of the organizations that own these homes are shifting their mission, or downsizing.”

Residential customers, he said, are doing the opposite: They want large homes with grand interior space, “great old details,” and expansion potential.

Ms. Baum and her co-brokers marketed the former Codman mansion at 7 East 96th on behalf of the board of the Manhattan Country School. The original price was $23 million, cash only, but the mansion, which possesses that rarest of Manhattan amenities, a curb cut and interior courtyard with a garage, set off a bidding war and ultimately went to contract for considerably more than the asking price, according to Ms. Baum.

She said the mansion’s next owner is what is known as an angel buyer: a woman who plans to fully restore it, a megamillion-dollar undertaking, and eventually move in, yet has agreed to let the school remain in place for two years while it finalizes its relocation and expansion plans.

“The demand for these homes is much higher than the supply,” Ms. Baum said. “Very few prewar mansions are still left; what we have are all there’s ever going to be.

“From a buyer’s viewpoint, it’s very much like an art auction,” she added. “This particular Matisse may not come up for sale again during your lifetime. The same sentiment applies to many of these mansions. They are one-of-a-kind and not replaceable.”

To find the same square footage in a condo or co-op would, real estate agents say, approach the prohibitively expensive if not the impossible.

“One surprising thing in general is just how few single-family homes there are in Manhattan, less than 2,000,” said Mr. Heym, the economist. “Inherently there is a very limited supply to begin with, so when the opportunity to acquire one arises, especially one of decent size, their scarcity can be a motivating factor. Their locations tend to be in the most coveted neighborhoods. They also receive a more favored tax treatment than co-ops and condos.

“And when an institution or nonprofit decides the time is right to downsize or cash in their equity and the next user is a homeowner, well, it means we’re creating one more unit of housing in a borough that badly needs it, right?” (Mr. Heym was only partly joking.)

The phenomenon might be described as a nouveau form of recycling, albeit on a grand and exclusionist scale. With prices ranging from $13 million (the Tracy Mansion in Brooklyn, listed by Marc Wisotsky and Jackie Lew of Halstead Property following the retirement of Anil and Hannah Sinha, career Montessori educators who had owned it for four decades) to more than $50 million, these rarefied mansions and townhouses are not destined for inhabitation by aspirational DIYers. Their asking prices don’t mention renovation and restoration, expensive and time-consuming undertakings that can rival the actual sales price.

The current crop of qualified buyers has one quality in common with most of the original owners of these mansions, said Ms. Del Nunzio of Brown Harris Stevens. “There is definitely an ‘I will be the king of my own castle’ attitude out there. And there are folks willing to spend $50 million or more to be the kings of their castles, where they feel like they can control everything and not have to answer to a co-op or condo board. At most, they answer to the Landmarks Commission and buildings department.”

Seekers of instant gratification within this stratospheric niche of homeownership, though, are advised to look elsewhere. Very few of these behemoths are in turnkey residential shape.

One exception is 46 East 66th Street, the longtime home to the Republic of Senegal’s ambassador and the site of the nation’s formal functions. The building, a circa 1890 landmark, has undergone a three-year restoration by HJ Development and will come to market later this year as a six-bedroom, seven-bath luxury townhouse priced at $28 million.

The developer, in an off-market deal, paid around $14 million in cash to acquire the 25-foot-wide property, which in 1919 gained a neo-Georgian brick facade by the society architect Mott B. Schmidt, and a smaller townhouse at 268 East 68th Street, which Senegal had used as offices. Both are being marketed as single-family homes, the first foray into that genre by the developer, whose previous focus was commercial-to-condo conversions, often in historic districts.

“To take a century-old building and totally reimagine and restore the interior and return it to the single-family residence it once was is a little like a surgeon going into someone’s body and performing major surgery,” said Ian Fishkin, the in-house counsel and acquisitions adviser at HJ Development. “We’re catering to the 1 percent at East 66th and Madison, but there is definitely something charming about owning your own home with your own front door and backyard at a significant address.”